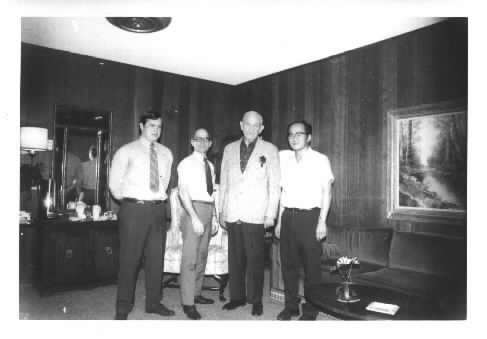 Following the death of Earle J. Gluck, application was filed with the FCC to form a Club Station in his Memorial using his call W4CQ. A dedication service was held with Mayor John Belk, VP and General Manager of WSOC-TV Freeman F. Jones, members of the Gluck family, and Club members present.

Earle J. Gluck was born in Baltimore, Maryland in 1900. He served in both World Wars in the U.S. Navy and in the Naval Reserve during the remainder of his life. He was one of the pioneers of WBT Radio in Charlotte back in 1922 and one of the organizers of WSOC Radio in 1933. He was also one of the leaders who were instrumental in obtaining the TV license for WSOC Channel 9 among two other competing applications for the TV license. Earle J. Gluck was also a pioneer in Amateur Radio and was active in the hobby from its infancy. He also was an active community leader and served on the Housing Authority of our city. He was a charter member of the Charlotte Amateur Radio Club and was instrumental in offering guidance and advice in its organization. After he became a Silent Key, his wife donated some of his amateur radio equipment to the Club. He held an Amateur Extra Class license with the call of W4CQ which the Club proudly proclaims in his memory

Login - Required for Site Administrators and Contributors
Photo of the day

HF / VHF Solar Propagation
If the data doesn't appear to update, try forcing a reload of the page without cache by holding down the shift key while clicking on the reload button.